The third and last beckett.com purchase was from Triple Play Sports Cards. Since they are local, my wife picked up the order for me when she was over in that part of town. There were about 100 cards in the purchase. There were a few odds and ends baseball cards, but probably 80%-90% were hockey cards; Dallas Stars and Minnesota North Stars to be exact. There were cards from 16 different years, and here are some representative samples from each of them. 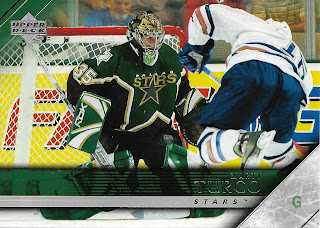 2005-06 Upper Deck. There were many Marty Turco cards in the lot, and this was my favorite with the opponent leaping at him like that. He is my favorite Stars goalie ever. 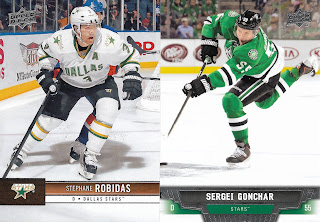 2012-13 and 2013-14 Upper Deck. These sets have vibrant color and great action shots. Upper Deck has mastered the borderless hockey card much better than Topps has done with baseball. 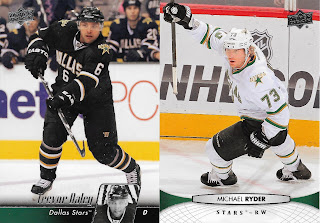 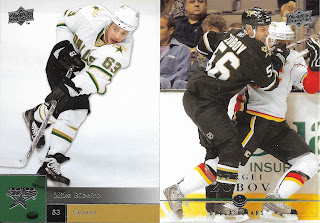 2008-09 and 2009-10 Upper Deck. I always liked Sergie Zubov. I don't know anything about him personally, so maybe that's a mistake. I just like the name. Zubov and Mike Ribeiro had about five cards each in the lot. 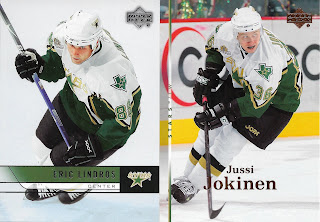 2006-07 and 2007-08 Upper Deck. I actually forgot that Eric Lindros had played briefly with the Stars. Jussi Jokinen is just one of five different Finnish player Stars cards in this timeframe in the lot. 2001-02 Topps and 1997-98 Upper Deck. Topps design from this year looks ancient compared to Upper Deck's of the same year directly below it. That's a great picture of Brenden Morrow though. The Upper Deck design shown here is nearly identical to that of their baseball issue. 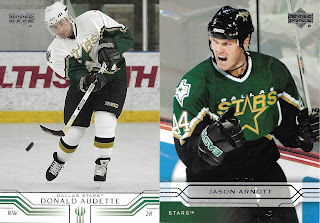 2001-02 and 2004-05 Upper Deck. By this time Upper Deck had permanently gone borderless with their hockey flagship cards.  They were a good 12-15 years ahead of Topps. I didn't collect hockey at the time, but I'm curious if their switch to borderless cards caused much of a stir in the hobby.

This wraps up my posts of recent hockey purchases. I don't have any more in the works. Maybe it'll take another new hockey season to start them up again.

For team set collectors like me, there are certain periods of time that are quite a challenge to find cards. I know part of the problem is that the team I collect, the Boston Red Sox, have been around forever, 1901 to be exact. While it's not a big enough complaint to make me switch allegiances, it sure would be a lot easier collecting cards of the Colorado Rockies or Florida Marlins. Even older teams like the Seattle Mariners or the Toronto Blue Jays wouldn't be all that bad because Topps has been making cards since before their inception. Yearly predictable flagship sets started in 1948, so if the team you collect is younger than that, you are very lucky! 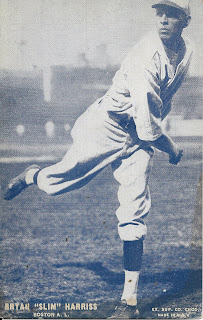 Two eras that are particularly troublesome for collectors of very old teams are the mid to late 1920's and the World War II years. There just weren't a lot of sets being produced. This card is from 1928 Exhibits (W461). Exhibits was a Chicago-based supply company which sold cards via vending machines at amusement parks. They issued baseball and football cards, as well as wild west, boxing, and actors. This is my first card from 1928. 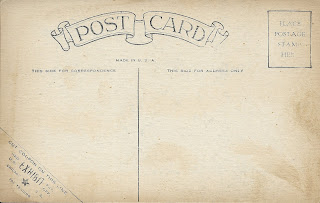 To say that it's postcard sized would be redundant because it actually double serves as a post card. Check out the back! See the fingerprints of some chocolate fingered kid from the amusement park that day?

I don't know too much about Bryan "Slim" Harriss here. But with a nickname of Slim, that girth in his buttocks region must not be him but something in the background. He pitched for the Red Sox from 1926 thru 1928 going 28-42 and leading the league with 21 losses in 1927. Maybe he got his nickname from his win-loss percentage (which was better than the team's those years, by the way).
Posted by EP at 4:34 PM 1 comment:

The second package from my Beckett order arrived the other day.  It was from Burbank Sportscards in Burbank, CA.  I think I've probably bought more cards from them than from any other place, ever.  They were there when I opened my beckett.com account in 2001. I don't buy from them as often as I used to, but when I do, it's a fairly big order.  This package brought 52 cards to my door, from all sports and even a non-sport. 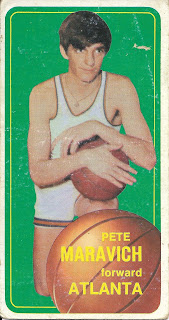 My favorite card in the group is this rookie card of Pete Maravich. It's pretty beat up on the corners and has a crease. That means it's in my price range! 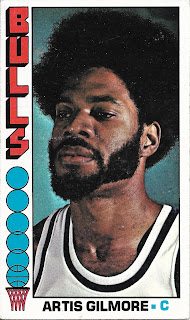 This "big card" of Artis Gilmore is also a favorite. He was one of my favorite non-Lakers as a kid. He was the only player I saw stand eye to eye with Kareem. I mostly remember him later in his career with the Spurs, but he was still a solid player. 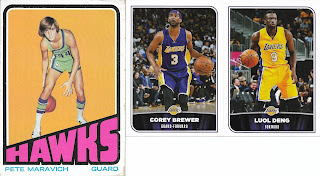 This is Maravich's third card, also only in the lot because of condition. But that's all right by me; I'm glad to add it to my collection. There were also a couple of Lakers stickers. It was the only way I could find to get these guys on Lakers "cards" this year. 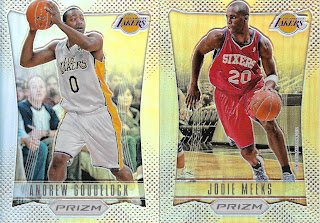 These Panini Prizm Prizms were a couple I didn't know about until seeing them in the trading card database.  I thought I had all the Lakers. 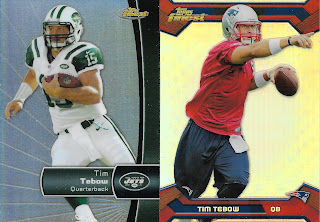 There were only two football cards; both Finest Refractors of Tim Tebow. 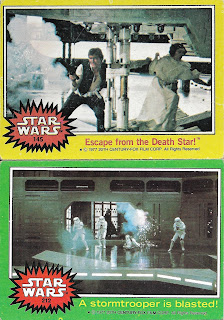 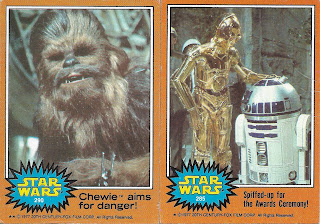 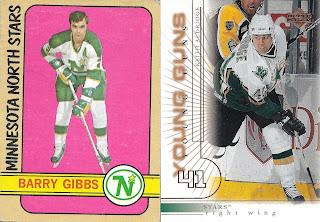 And there was hockey.  This Barry Gibbs from 1972-73 completes the North Stars team set for that year!  And this Keith Aldridge is my first Young Guns card! Most of them are just way more than I want to spend on a hockey card, but this one was pretty cheap. 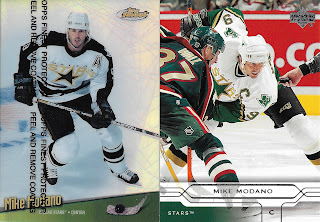 And there were a couple Mike Modanos.  This is my first Finest Refractor hockey card! 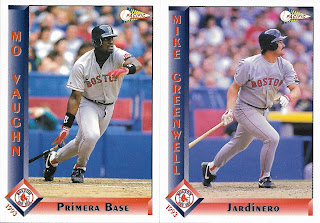 And then there was baseball.  I mentioned before that I was going for the Red Sox team set of 1993 Pacific Spanish.  These two and two others in the package complete series 1.  I still have all of series 2 to go. 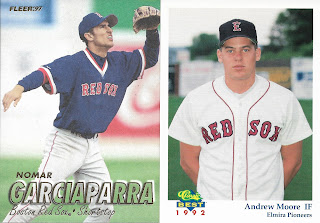 This 1997 Fleer Nomar Garciaparra completes the Red Sox team set for that product.  And Andrew Moore here and about 15 other Elmira Pioneers from that same issue complete that team set.  It's the first time I've done a minor league team set card by card. 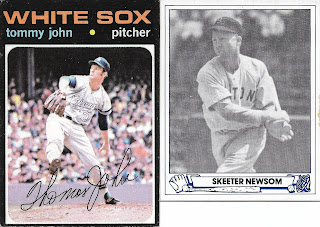 Tommy John was the only vintage baseball card as most of Burbank's are overpriced in my opinion.  Skeeter Newsom fills out 1983 TCMA a bit more for me.  The blemish on the edge is hardly noticeable in real life.  In fact, I wasn't even aware of it until seeing the scan.  I like this set because it tries to get some cards out there from the WWII years when not much was produced.  I only wish there were more than a handful of Red Sox for each war year in the set. 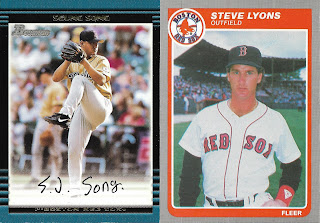 And finally, there were some odds and ends rookies and updates that were there too.  Here are a couple examples.
Posted by EP at 6:26 PM 3 comments:

The first package from Beckett arrived today. It was from the seller Card Gallery. The entire purchase was cards off my want list.

As you might have noticed, I'm on a big hockey kick right now. I picked off a whole bunch more from my Stars and North Stars team set builds. 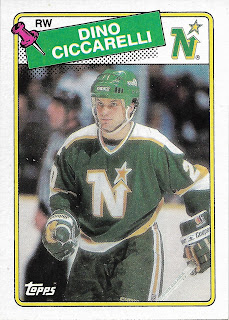 Dino Ciccarelli was a big name around here before Mike Modano came along. He was a solid point a game guy. 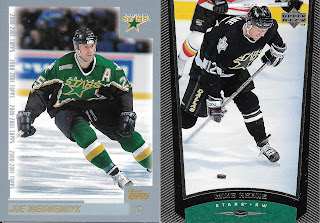 This Joe Nieuwendyk from 2000-01 was the last Topps I still needed from that year. I like how the shades on the ice blend so well with the card border. Mike Keane was another of my favorites. Too bad he was only on the team four years. 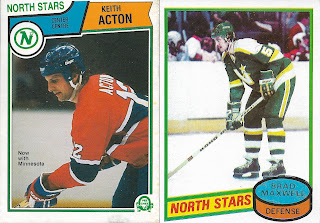 Solid dents were made in the early 80's Topps and O-Pee-Chee too. They were mostly no-names.

There were also some odds and ends Red Sox. 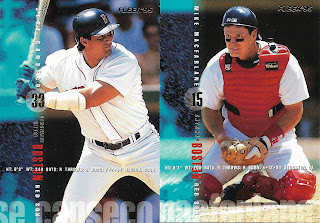 All four Red Sox in the 1995 Fleer Update were there. 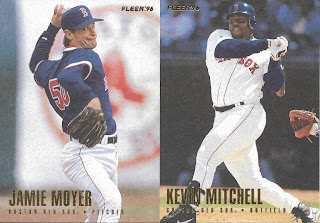 Lastly, there were some cards from the 1992 Elmira Pioneers minor league set. I kind of gave up looking for a team set of them, so I'm starting to buy them one by one. This package from Card Gallery had just under half the team set in it. There were no big names, so I didn't scan any of them.
Posted by EP at 9:10 PM No comments:

As employee of the month at work I received some Visa gift cards as part of the prize.  I had saved them and planned to spend them on the Minneapolis trip, but actually only spent a small part of them.  So upon returning, they were burning a hole in my pocket!  I had to do something about that.  So over the past couple of days I've been doing just that.  I've made card purchases on eBay, Beckett.com, and at a LCS.  Hopefully, I will receive them in the coming days and share my findings with all of you!
The first package arrived yesterday.  There were only two cards in this one.  The first is a 1936 National Chicle Fine Pen Premiums (R313) of Rube Walberg.  My collection had been mostly limited to the Wide Pen Premiums of Goudey that year, so I still didn't have Rube.  It's in really decent shape for 82 years old, and the price was right. 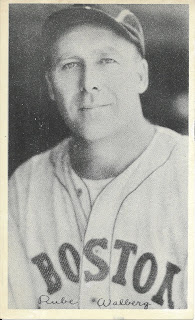 I don't know much about Mr. Walberg so I had to look him up.  He played for the Red Sox for four years at the very end of his career.  He both started and pitched in relief.  His best days were with the Philadelphia A's, and he pitched in each of their World Series from 1929-1931.  When he came to Boston in 1934 he was 37 years old and pretty average.  An interesting thing about Rube Walberg is that he had four managers during his 15 year major league career, and all four are in the Hall of Fame. 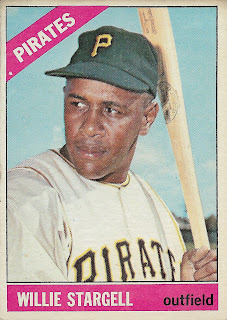 Since I had already paid for shipping, I perused through the seller's other cards for sale and found this 1966 Topps Willie Stargell.  It was only $2 which I thought was a great price for it.  Other than Red Sox, I don't have too many cards that old, but I couldn't pass up on Pops.

So here's the rest of the story about those gift cards.  As the employee of the month recipient, one day at a company-wide meeting I stood with the CEO in front of the company having a bunch of nice things said about me, and receiving my prizes.  Just under three weeks later I was sitting in that same CEO's office having him tell me they were going to proceed without my services.  About one-tenth of the office was let go that day.  It just goes to show that nothing is certain, and anything can happen.  Now it's a couple months later and I'm in another good spot.  This was my first week on a new job, working remotely for a company in Dallas, and still in software development.  And my new boss lives in Boston and is a huge Red Sox fan!  He told me if he'd known that about me earlier we could have just skipped the interviews.
Posted by EP at 7:01 PM 2 comments: